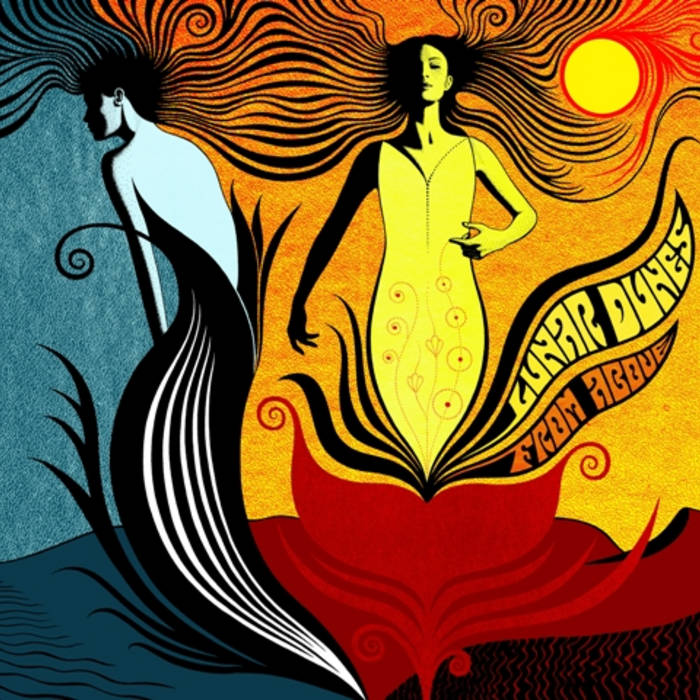 Formed by the west London trio of guitarist Adam Blake (Treatment, Natacha Atlas, Cornershop) and SOLUS3 founder members drummer Hami (Transglobal Underground) and bassist Ian Blackaby, Lunar Dunes released their debut album ‘From Above’ in November 2007. They have since been joined by vocalist Krupa (Transglobal Underground and SOLUS3) and Larry Whelan on sax and keys (Natacha Atlas) plus a floating pool of guest musicans.

Recorded in three days, with sleeve design by Italian artist Iker Spozio, (Leaf Records etc) and mixed and engineered by Paul Tipler (Stereolab, Mojave 3, Wonderstuff), ‘From Above’ is available in single cd and digital download formats.

Lunar Dunes made their live debut at the Marquee Club in London on January 11 2008 and launched a residency with their own Club Dune events at the Inn on the Green in Ladbroke Grove on Friday March 21 2008. Guests included White Hills, Damo Suzuki and Wolf People.

“Every now and then something arrives in the post that just knocks us all sideways. Or, more importantly, makes us all just shut the fuck up and listen. From Above has just done that …. They’ve obviously digested everything from Parliament & Funkadelic to Black Sabbath and the entire output of Can and Neu!, but what they’ve managed to do is take all of that, mix it together and cook up the best tasting jam sandwich you’ve had in years. Guys, this is one hell of a trip.”
– Incendiary Magazine

“From London comes the debut from Lunar Dunes, an instrumental psychedelic space rock band that really knows how to lay down a cosmic groove. At times they sound like a more acid rock version of Ozric Tentacles, and at others they reminded me of bands like Hidria Spacefolk, that are firmly in the space-psych realm, though the tight playing and solid musicianship gives the music a progressive rock edge as well. But they really excel at just laying down cool jamming melodic, meditative, mind massaging groove tunes.”
- Roadburn

Very late and too zonked to do anything but watch the travel channel? You can just turn down the sound on the boob-tube and spin this stuff instead. Suddenly the boring shopumentaries from Dubai will be a journey into a “1001 Nights,” accompanied by a bunch of krautrock radicals from Germany in the 70s. Who needs Tivo?
- Vice Magazine

“This is out and out, gloriously over the top spacerock …. When they hit full speed and start dropping in all sorts of jazz rhythms and prog basslines, stretch out and show just how ludicrously talented they are, they're as mad as a roomful of hatters on an acid fuelled stag night”
– Space Rock

“This album, recorded in a mere three days and seemingly having come from nowhere, is a really pleasant surprise. One of the best things I've heard all year in fact.”
– Evil Sponge

“From Above remains an enjoyable yet complex listen, almost fascinating if you come to think of how note after note after note, the trio makes randomness a tangible reality. Holding a vintage sound, the congregation of genres manages to offer an uttermost refreshing experience, for as long as you can descry the rhythmically complex, deeply jazz rooted bass lines, the reminiscences of space rock and the characteristic krautrock experimentalism, you're not bound to be bored”
– Silent Ballet

“These folks manage to combine great instrumentation with interesting music that is rhythmically complex, but in a way that never takes center stage away from the compositions. One of the year's best. 95/100”
- Concrete Web

Caroline Lavelle: Cello on My Lagan Love
Krupa: Vocal on Herzegovina (featuring Le Petit Chevalier)
Sheema Mukherjee: Tampora on When I Was On Horseback

All songs composed and arranged by Adam Blake, Hami & Ian Blackaby except:

My Lagan Love & When I Was On Horseback traditional arranged by Adam Blake, Hami & Ian Blackaby